As Northern Ireland struggles to set up a new executive, a gamble on a new electoral system may be recommended. UEA graduate Sam Kenward makes the case why the constructive current system should be retained.

With the current issues in getting a new executive set up in Northern Ireland, it is evident that divisions remain between Catholics and Protestants and between Catholic parties like Sinn Fein who desire a united Ireland and Protestant parties like the Democratic Unionist Party (DUP) who support the United Kingdom. Northern Ireland is still a deeply divided society. The Good Friday Agreement of 1998 made some progress in helping to create stability and part of this stability has come from the electoral system. Northern Ireland has stuck with Single Transferable Vote (STV) since 1973 but with divisions still rife, is it still the best option? I argue here that despite some issues, STV should be kept because it has achieved progress in creating more areas of discussion and common ground.

STV is a way of distributing seats according to ranked preferences. Voters elect multiple local MPs and rank candidates from most to least preferred. Voters can rank a candidate they really like as first preference and candidates who they would prefer to get elected over others as second/third/forth preferences and so on. Winning candidates must meet a target called a “quota”. If no candidates meet the quota on first preference votes, the candidate with the least votes is eliminated and their votes are redistributed according to second preferences. This process of elimination and redistribution occurs until all the seats are filled.
This has been the system for assembly elections since 1973 and since 1998, this system has returned power-sharing executives with the leading Catholic parties (most recently Sinn Fein) and leading Protestant parties (most recently the DUP) serving in government together. It has been put forward by some like political scientist Sydney Elliott that because lower preferences may stay within one community and not cross the divide (eg, Catholic nationalist voters ranking other Catholic nationalists as lower preferences rather than Protestant unionist candidates), STV could be questioned and perhaps another system should be tried instead. I disagree

It was never going to be perfect

The divisions in Northern Ireland between Protestants and Catholics are deeply engrained. History means there will not be complete harmony. Therefore, the best to be hoped for is that enough areas of discussion and agreement can be cultivated between the sides. STV does this. It ensures common ground is cultivated because there is some shift away from the extremes. This is so because an extremist agenda will not win enough votes to get elected so parties move towards the center and as a result of this, there are more areas where discussion and agreement can occur post-election. Political scientist Benjamin Reilly said that a shift away from the extremes was present in the post-Good Friday Agreement 1998 election as parties like Sinn Fein became more moderate so they could win second preferences from Social Democratic Labour Party (SDLP) voters. This in itself may not seem impressive as the SDLP are a Catholic party, however the change was significant as Sinn Fein was less hard-line than they had been and there were now more areas of discussion with their Protestant counterparts. This effect of STV of parties moving away from the extremes to win lower preferences has continued, and both unionist and nationalist parties try to win lower preferences from centrist parties like Alliance and from the other community if they can. More areas of common ground are cultivated because parties are closer to each other than they used to be and although they do not completely agree on everything as we are currently reminded of, they can discuss and compromise because that is where their mandate comes from. This then is a constructive system and is better than alternatives like First Past the Post which is more about parties getting their core vote out to get past the winning ‘post’. In a difficult situation, STV is helping 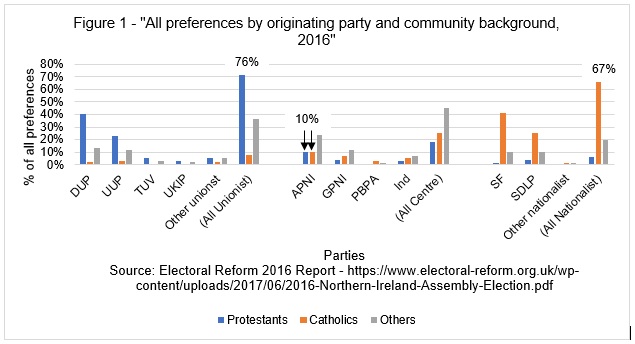 As said above, the role of STV is not to eliminate these deeply engrained divisions entirely but to try and increase the common ground. And with the surprisingly good relationship between the late Ian Paisley and Martin McGuinness, it seems that STV has done a relatively good job in allowing more common ground to be cultivated and retained. If anything would warrant STV staying surely it is the reality now where proud Catholics and proud Protestants soften their stances to win lower preferences and want to listen to one another. This is a reality which STV has helped and even with the divisions that still exist, we cannot ignore the progress that STV has assisted.

Sam is a UEA Politics graduate who wrote this piece as part of the final year module “Elections and Electoral Malpractice” run by Toby James.