A common argument made against allowing 16-year-olds to vote is that teenagers are not mature and responsible enough to be trusted to make a sensible decision; but statistics show, that in many ways, American teens (as well as their international counterparts) are better behaved and more responsible than ever before, UEA student Nick Stone argues.

The Debate around Votes at 16

In the past few years the movement to give 16-year-olds the vote in the US has started to gather attention in the wake of the Parkland school shooting. In roughly a dozen countries, 16-year-olds have the right to vote; this includes other advanced economies like Scotland and Austria and some of the United States Southern neighbours like Argentina and Brazil. The New York Times has endorsed this movement in the wake of the Parkland mass shooting on the basis that this will encourage voting by getting people involved in the process when they are young – a point of view supported by Zeglovits and Zandonella’s 2013 study on Austrian voters. The Economist, alike others, also argue 16 is a better age to start voting because 16-year-olds are far more likely to live at a static address as opposed to after 18, when many move into a world of short term rents or travelling between home and university making it more difficult to track if and where they are registered. Another key argument put forward in merit of giving 16-year-olds the vote is to help make up for the demographic trend that has led to older voters massively outnumbering younger voters in many elections thus leading to great intergenerational divides.

One of the main arguments imposed against it is the idea that teenagers are not mature enough to make sensible decisions and would vote recklessly. Naysayers can point to studies on behaviour to prove their belief that teenagers are not to be trusted with the vote because they are immature and have inconsistent decision making. In the run up to the UK’s EU referendum the justice minister, Lord Faulks, argued for excluding 16-year-olds from the vote because “their brains are too immature”. Other arguments against extending the franchise to 16-year-olds include the idea that voting is too much of a responsibility and that because of this naïve youth can easily be sucked into voting for extremist parties.

However, if we judge teens on their behaviour we can see a massive improvement in dozens of metrics that could be used to judge sensibleness; for instance, according to the Youth Risk Behaviour Surveillance Survey (sent to 10,000 high school students every other year by the Federal Government) US teenagers are drinking less and at a later age. The study also finds an incredible drop in behavioural outcomes that could be considered impulsive and reckless (see graph). The list of behaviours this study covers is vast; even when comparing the teens of today to those of 2007 we can see a 46% decline in smoking, a 36% decline in teenagers ever having had a physical fight, a 32% decline in binge drinking and a stunning 44% decline in teenage pregnancy. Additionally, this trend is almost completely unobserved by the adult population, as shown by a 2013 survey from the National Campaign to Prevent Teen and Unplanned Pregnancy, where 50% of adult subjects thought teenage pregnancy had increased in the US since 1990 whereas only 18% knew that it had decreased. 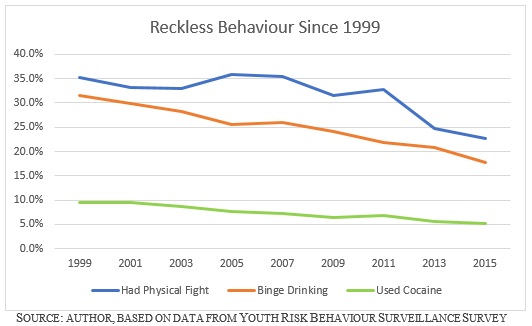 Likewise, these results are consistent across the developed world. In the UK the number of teenagers held in police custody fell by two thirds between 2007 and 2016. Similarly, Shoko Yoneyama, an expert on Japanese teenagers calls them “kind of boring” and in Sweden, the number of 15- to 16- year-olds who are completely abstaining from mind altering substances (such as drugs and alcohol) has almost tripled from 11% to 31% since 2003. The facts are plain to see that across the developed world teenagers’ behaviour is painting a picture of a generation that is less reckless, less impulsive and more sensible than their societal image and predecessors; and therefore, works to discredit the argument that this age category is too immature to be given the right to vote.

Additionally, a brief glance at electoral outcomes also shows that fears of empowering an immature generation open to radicalisation may have been slightly unnecessary. The first Scottish parliamentary elections to take place after extending the franchise to 16-year-olds retained the SNP’s position as the largest party; and in Austria’s most recent federal election, a right-wing coalition was recreated – having already occurred in 1999, 8 years before 16-year-olds could vote. These early results hardly support the argument that 16-year-olds’ underdeveloped decision-making powers will derail democracy. In favour of this notion, one study of Austrian 16-year-old voters concludes that voters at 16 were no less able to make a consistent vote than older groups, thereby working to dispel the view that 16-year-olds are not mature enough to make a choice correctly and that they will radically alter election outcomes.

When considering the potential benefits of creating more politically engaged young people and a more demographically balanced electorate, the case for votes at age 16 becomes obvious. Despite popular public perception that today’s youth are less trustworthy and worse behaved than ever, teenagers continue to become more sensible and less prone to reckless behaviour. This trend somewhat deflates arguments that 16-year-olds are too immature to be trusted with the vote. Furthermore, implemented votes at 16 have failed to create the feared rise of extremist and radical parties. However, irrespective of other arguments against votes at 16, recent sustained trends in behaviour create a compelling argument that at the very least critics should stop calling young people too immature. 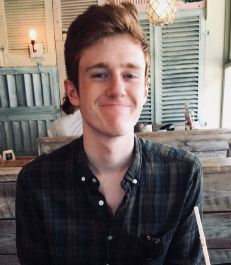 Nick Stone is an undergraduate student studying for a BSc in Politics and Economics at UEA, he chose Toby James’ elections and electoral malpractice module in his third year.