Mandela’s death is a moment for us to think on the complexities of the world we live in, to show compassion and be pragmatic while possessing a vision for humanity.

So much can be said, and so much is being said, about Nelson Mandela as we learn of his death on the 5th December 2013. But above all is the knowledge that we had the privilege of living in the times of a great person. Such is our fortune. 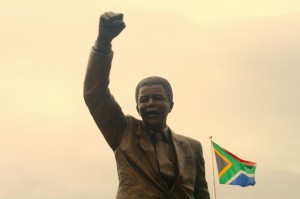 Why are we fortunate?

Because we witness for ourselves how life can be lead with dignity, compassion and joy. We see how as individuals and societies we can bring about change.

Mandela chose a variety of methods to change the world he lived in. He trained as a lawyer and opened the first black law firm in South Africa in 1952 with his friend, Oliver Tambo. Because of Apartheid laws, Black South Africans ended up continuously in court in need of legal representation. This brought him into the heart of politics of race and segregation. He became completely focused on bringing about political change.

Formerly committed to nonviolent protest, Mandela co-founded Umkhonto we Sizwe in 1961. This was the armed division of the African National Congress (ANC) and was dedicated to sabotage and guerrilla war tactics. Facing one of the most racist and violent societies of the 20th century, Mandela believed that armed struggle was the only way to achieve the much needed change.

Mandela was a deeply human person, blessed with pragmatism and vision. Love for South Africa and its people. This impelled him to take up arms in face of a death regime.

Would he now be named a terrorist? Margaret Thatcher called him one. As the media now reminds us; he went from being a terrorist to having tea with the Queen. How extraordinary!

Born in 1963 in Johannesburg, the year Mandela was convicted and sent to jail on Robben Island for sabotage, my life has been in the shadow of this distinguished man. We have all been under his influence; those of us who stood at Trafalgar Square in the 1980s singing for his freedom and the downfall of Apartheid; those who craved change in the dark hours of civil violence in South Africa; those everyone who felt the wonder of the momentous transition to a post-apartheid world – we owe him so much.

Mandela was truly exceptional. South Africa came to trust in him in spite of him being outlawed, being labelled a terrorist and jailed for 27 years. He was freed at the age of 72 and went on to lead the ANC to victory in the first democratic elections of the country.

What can Mandela’s life tell us about change and the times we live in?

That global events are inherently complex. That perceptions change. That we need to keep our eye on long term goals and work collectively to obtain them. That we need political leaders passionate about humanity, about the welfare of the planet, and who have integrity, uprightness and honour.

Elizabeth Cobbett is lecturer in International Political Economy at UEA. Her research focuses on the ways in which global finance seeks profitable opportunities within localised structures. This amplifies the significance of social factors often ignored by mainstream approaches. Present research focuses on the growth of key African financial hubs – South Africa, Nigeria and Kenya.

Image credits: © 2012 Zapiro (All Rights Reserved),printed/used with permission from www.zapiro.com.