Dr. Rupert Read argues that  parliamentary democracy needs to be reformed so that future generations are formally represented.

[one_half]This week, UEA Philosophy, Politics and Law Departments will be putting on a ‘Philosopher-Kings?’ event on the subject of “Is Parliament fit for purpose?”: This will take place on Fri Nov 15th at 6pm in Thomas Paine Lecture Theatre at UEA. Myself and Alan Finlayson will be responding as academics to the weighty words that will be spoken in answer to this question by Richard Bacon MP and new Green Party Baronness Jenny Jones.

Doubtless some radical ideas may be put forward during the evening for how to revitalise the foremost among our ailing democratic institutions, the mother of Parliaments. But it is likely that many audience-members will judge that the ideas are not radical enough, such is the depth of popular dissatisfaction with the lack of real democracy in this country, today. I am thinking of the growth in corporate and moneyed dominance of politics, and the way that globalisation undercuts our national institutions, and so on. But there’s something arguably even worse than these: the gross absence from our system of serious policies and institutions that could guarantee any long-termism in our democracy. The lack, as one might put it, of any effort to take care of or to enfranchise or represent future people.

Last year, the ‘Green House’ thinktank launched, at Parliament, a report that I’ve written about how to restructure democratic institutions, to take care of the people of our kingdom who are not here yet: future people.

Here are some pictures of the event.

The starting point of my thinking on all this is this question: ‘Democracy’ means ‘government by the people’, but who are ‘the people’? 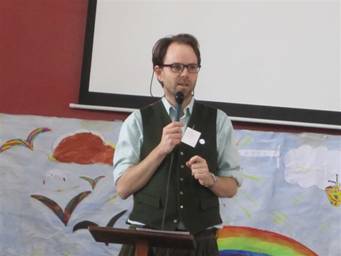 I insist, following Burke, that society exists over time and decisions taken today can have significant consequences for people yet to be born. My report argues therefore that the interests of future generations should be formally represented within our existing parliamentary democracy. Building on the philosophies of Plato (who thought that guardians – philosopher-kings – should rule, but who was anti-democratic) and of deliberative democracy, and on the ‘precedent’ of Hungary’s innovative office of Ombudsman for Future Generations, my report proposes the creation of a new legislative house, to sit above the upper house – ‘Guardians’ of Future Generations. The members of this body would be selected by ‘sortition’, as is current practice for jury service, in order to ensure independence from present-day party political interests.

The Guardians would have a power of veto over legislation that was likely to have substantial negative effects for society in the future, the right to review major administrative decisions which substantially affected future people and perhaps also the power to initiate legislation to preserve the basic needs and interests of future people.

I propose the creation of such ‘Guardians’ locally, nationally, and internationally (e.g. at the U.N. level).

If you want to read my report, which I prepared with the assistance of the new ‘Alliance for future generations’ umbrella-group of NGOs, and which drew of course on my identity and research as a UEA political philosopher, here it is.[/one_half_last]

Dr. Rupert Read is a Reader in the School of Philosophy, University of East Anglia.  Recent monographs include Wittgenstein among the Sciences and There is no such thing as a Social Science.

One thought on “An immodest proposal to revolutionise an ailing institution: ‘Guardians for future generations’”