Lee Marsden is Professor of Faith and Global Politics, and Head of the School of Politics, Philosophy, Language and Communication Studies at the University of East Anglia. He very kindly found some time in his diary to talk to us about his new book – Religion and International Security – that has just been published by Polity. 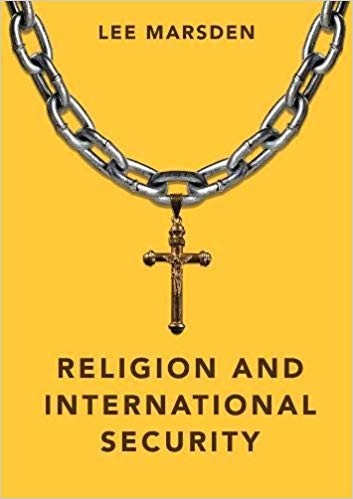 Q Professor Marsden, many congratulations on the publication of your new book! Could you say a few words about your motivation for writing it – and for writing it now – and perhaps on how Religion and International Security builds on your earlier work such as For God’s Sake?

The motivation for writing Religion and International Security at this time comes from a frustration that although religion is often cited as major cause of terrorism or conflict within the world it is seldom analysed or contextualised. For many in the West religion is an alien concept best caricatured or blamed for the ills of society rather than understood and nuanced to reflect the variety of religious experience and expression and both the negative and positive contributions that religion has made, and continues to make, to international security. The book is an attempt to move beyond the religion ‘good or bad’ dichotomy: to consider the contribution religious actors make towards peace and security, and how politicians seek to co-opt or isolate religious actors in pursuance of domestic and foreign policy objectives.

There are a number of excellent books which seek to analyse the role of religion and security in specific contexts or in relation to terrorism or faith-based initiatives. My book seeks to provide a comprehensive overview of the wide panoply of religious and security related issues.

Q Given the enormous scope of your two key concepts – religion and security – how did you go about focusing your analysis: for instance, how did you decide what to include, and what to leave out?

This was tough. As you have indicated these subjects are vast and potentially cover many thousands of years of human experience. There were very practical considerations about whether to write the book for a small academic audience or to extend this audience to include policy makers, a wider academic audience, students and the general reader. I believe the issues raised in the book are of fundamental importance to how we understand the world and so opted to appeal to as wide an audience as possible.

The book sits within, and seeks to challenge, dominant conceptions within international relations/international security as a discipline. So, understanding how a western-centric discipline has largely marginalised religion serves as a starting point before making the case for religion to be taken into account in contemporary international relations theorising.  It was important to consider and analyse the relationship of religion to violence and peacemaking through the use of scriptural, current and historical examples, problematizing these rather than seeing each as monocausal. Religion and security is analysed at three levels of international, national and human security. Key concepts such as just war theory, jihad, terrorism, pacifism, faith based diplomacy, faith-based initiatives, humanitarian assistance, persecution, apostasy, clashes and dialogues of civilisations and peacemaking are presented in the context of religion, and religious actors as sources of conflict and cooperation between and within religious traditions.

Clearly in a book of 270 pages there is only so much which can be included and there are numerous case studies and examples which are included which could have been explored in far greater depth. My hope is that others will be inspired to dig deeper and make their own contribution to increasing our understanding of the role religion and security.

Q Why have scholars of international security – and International Relations more broadly – been slow in recognising the importance of religion in global politics? Is this beginning to change?

I talk about this at some length in the book. Briefly I believe this is a reflection of society in the West where there has been a clear separation of church and state in the public square, which has marginalised religious actors.  In turn the academy has largely, though not exclusively, reinforced this exclusion of religion through an overemphasis on rationality and the delegitimisation of religious voices as irrational, backward, historical, and soon to be irrelevant through the processes of secularisation. The Iranian revolution of 1979, the emergence of Militant Islamist groupings in the Middle East and South Asia, and the events of 9/11 provided a wakeup call to western academics, demonstrating that outside Western Europe religion plays an important role in society and can motivate political action.  Those of us interested in religion and security are no longer voices in the wilderness but have an acknowledged contribution to make in understanding contemporary security issues in global politics.

Q One of the themes explored in your new book is the rise of religious violence around the world. How can we make sense of this rise, and how concerned should we be about it?

It is a difficult call as to whether violence with a religious dimension is actually increasing or whether the reporting and awareness of it is on the increase. Recent polling suggests that there are greater incidents of religious persecution, not always resulting in violence, and the prominence of incidents of terrorism ostensibly carried out in the name of religion receives greater attention than previously. The prominence of an oriental ‘other’ in the form of Islamist linked violence and persecution feeds into a securitised narrative which problematizes a particular faith in such a way that resonates with fearful populations unfamiliar with religion and ill-informed by often partisan interests.

What my book seeks to do is to contextualise such violence, disaggregating religion as one among a number of causalities. Insecurity and violence is more prevalent where the scapegoating of minority groups attributes societal ills to that group: religion is a handy identifier to homogenous the ‘other’ and persecute accordingly. Conversely, marginalised minorities or disadvantaged majorities may resort to violence through a demonisation of their ‘other’.   In Religion and International Security I attempt to demonstrate how a greater awareness of religion can lead to greater understanding and the ability to bring religious antagonists together through mutual understanding and recognition, exploring the role some religious actors can play in acting as honest brokers in conflicts without an apparent religious element.

We should be concerned about all violence in the world but as authentic religious and secular voices, committed to peacemaking, come to the fore I think we should be hopeful about the future.

Q Now that Religion and International Security has been published, what are your hopes for the book? What would you like readers to take away from it, and what impact would you like it to have on the world?

My hopes for the book are that it will reach a wide range of audiences across the world and encourage debate around the role of religion in the public square and in particular when discussing international security.   I would like readers to take away a greater understanding of the importance of religion in people’s identity and how this lived experience can shape their worldview and the influence this can play for good or ill in international security. I hope that people would have a more nuanced understanding of the multifaceted nature of conflict and where religion fits into particular conflicts and conflict resolution. What impact would I like it to have on the world? Well, I believe the world changes one person at a time and so I would like it to encourage mutual respect among peoples of faith, those unsure or without faith and to strive for what unites rather than divides us and to apply the golden rule of doing unto others as we would have done unto us.

Professor Marsden, thank you very much indeed for your time. Religion and International Security has been published by Polity, and is now available for purchase via their website and in all good bookshops!