England were knocked out of the Brazil 2014 World Cup ‘early’ at the group stage.  But in a reply to Jonathan Freedland, Dr. Michael Skey argues that this had nothing to do with a lack of national identity.

Of all the things that have been written in the aftermath of England’s exit from the world cup in the past week, one of the most eye-catching was The Guardian journalist, Jonathan Freedland’s claim that the team’s on field woes might be linked to uncertainty over what it means to be English in the contemporary era. Musing on the argument that what differentiated England and Uruguay was that the latter had a strong national identity, he wrote;

‘the uncertainty shown by the English national team reflects an uncertainty that lurks within the English themselves, that if the 11 on the field didn’t know who they were, they were ably representing a nation that feels similarly confused …. Those 11 young men carried quite a burden on Thursday night. We wanted them to know us better than we know ourselves’

Leaving aside the fact that everyone and their brother feels that they have something profound to say about football during the world cup blaming the failure of Gerrard, Rooney and company on an existential crisis over the forthcoming Scottish vote on independence seems a little fanciful. 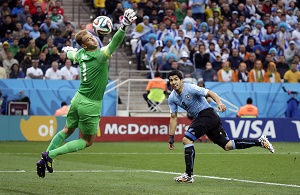 First and foremost, if a crisis of identity was the recipe for disaster on the sporting field one might reasonably ask why Spain, a team populated by a core of players from Catalonia, had been able to dominate international football for the best part of a decade, before their recent demise in Brazil.  Likewise, Germany seem to have done a reasonable job of building successful football teams even as battles over identity and belonging have raged in the country’s political and social spheres. Did Xavi, Fabregas and Puyol ponder conflicted loyalties as they passed successive challengers into submission on the European and world stage? Did Ozil, Khedira and Klose ruminate over similar issues as they tore England apart in the 2010 world cup? Second, uncertainty over ‘who they were’ doesn’t seem to have troubled some of England’s more successful sporting teams and performers in recent times, whether they be rugby players, cricketers, cyclists or athletes.  Why weren’t these performers also undone by carrying this burden of English uncertainty?

One might, of course, argue that football is the nation’s most popular, and high profile, sport and therefore matters more to the national psyche and there may be some truth to this argument, with English footballers subject to more sustained scrutiny and (often) opprobrium. However, acknowledging this should not allow us to overlook two fundamental points about the game in England, which are of far more importance when it comes to explaining the English teams’ ongoing struggles and, just as importantly, popular responses to them.

The first is pretty obvious but nevertheless should continue to be made at every opportunity by those with any interest in this topic. Put simply, the power of the English Premiership means that all other facets of the game have been increasingly neglected, including both the national team and the development of the game at all levels. This would include the commonplace argument about the number of English-born players now getting regular games in the highest tier of English football. There is no doubt that the presence of players from around the world makes the Premiership interesting and entertaining. However, it has also meant that English players are increasingly side-lined and those that do make it become subject to undue hype and inflated transfer fees – none of which helps their development. But alongside the fact that England has become a net importers of players (compared to, say, Germany, Spain and Italy) is the extent to which the search for TV monies has not only undermined the viability of a growing number of individual clubs but also the overall importance of the league structure, both professional and amateur. In the latter case, the amounts of money that are spent on coaching and facilities at the grassroots of the game are pitiful compared with other European nations and a disgrace given the amount of money the game currently generates.

The second issue is less obvious but does actually have something to do with questions of national identity, though not for the players but the country at large. In other words, it is much less about Wayne Rooney pondering the suitability of singing the British national anthem before an England game and much more about the inability of the British/English populace (the latter making up 85% of the former and still largely conflating the two) to realistically evaluate the efforts of its representatives in relation to a changing world. Put bluntly, the furore over England’s patchy record of qualifying for, and succeeding in, international tournaments is part of that misty-eyed refusal to acknowledge that we are no longer living in a time when, ‘Britannia ruled the waves’. A time when, so the story goes, Britain, like some benevolent uncle, handed out gifts to the rest of the world (civilisation, democracy, railways, football).

If, as Edward Said famously pointed out, developing, and sustaining, an empire requires having some impressive ideas about one’s place in the world, then losing it also requires the recalibration of some of those ideas. Unfortunately, in Britain this hasn’t really happened or, at least, hasn’t happened as much as it should have. Don’t believe me? Listen to the current crop of radio phone-ins and amidst all the teeth gnashing you can hear a common refrain – the assumption that somehow ‘we’ should be winning games, should be competing with the big boys, shouldn’t be going out this early in the competition. It’s a sense of entitlement, it’s horribly misplaced (in international relations as much as international sport) and it needs to be addressed.

To paraphrase the late, great Stuart Hall, Britain is a small country with an interesting history somewhere in Northern Europe. But it barely has any industry left to rule, never mind the waves. Indeed, having once developed railway systems all over the world, it now has to go cap in hand to China to get a new line built between its two major cities.  But the day-to-day debates in this country don’t reflect these realities. Politicians and other leaders have singularly failed to provide a narrative for the future that can address these changing times. Just look at the ways they have tried to deal with UKIP’s attempts at pretending the last 70 years never happened. Rather than offering a vision of where we should be headed and what a just society might look like, they have simply capitulated, blaming the poorest members of society for the country’s decline.  And while there might be a big difference between these odious policies and moaning at overpaid footballers for failing to beat Uruguay, the constant harking back to a rose-tinted past is a real stumbling block when trying to think about how things might change for the better in the future.

As a result, the real problem here is not that English players are uncertain about who they are. It’s not only about the fact that increasing numbers can’t get a decent game – at the elite level, because they aren’t being offered professional contracts, everywhere else because the pitches are waterlogged or have been sold off to build flats. It’s also a matter of expectations and the fact that this interesting little country has still to find an appropriate role for itself in a rapidly changing world.

Dr. Michael Skey is a lecturer in Media & Culture at the University of East Anglia and author of the 2012 book, National Belonging and Everyday Life.

One thought on “England, the 2014 World Cup and Englishness: ‘They think it’s all over’ – it has been for a long, long time”