Last week at our School Question Time, someone asked about whether the experience of Coalition government has made people more apathetic. I gave what could only be described as a holding answer, saying that I’d have to look at the data from the British Election Survey (BES).

As per Betteridge’s law of headlines, the answer is, “No, not really”. But it’s important to check these kinds of claims carefully to ward against people assuming it.

The BES asks two questions which are related to apathy. One asks respondents (and I’m paraphrasing here) “how much attention do you pay to politics”, with responses on a zero (no attention) to ten (a great deal of attention) scale. The other asks, “how much influence do you feel you have over politics”, with responses on the same zero (no influence) to ten (a great deal of influence) scale.

The BES has been putting monthly surveys out as part of their continuous monitoring survey, so we have several months before and after the election, barring a few files that failed to load into my stats program. The figures below show the average level of interest/influence across these months, with associated 95% confidence intervals, and the best fitting straight line for the periods before and after the election. Click for bigger versions. 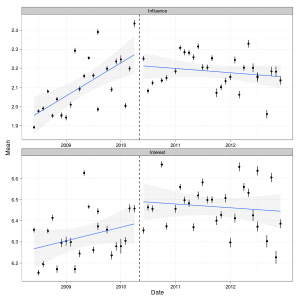 How best can we describe this pattern? We could say that interest in, and perceived influence over politics, rose in the period leading into the election, after which point is has more or less plateaued. True, the best fitting straight line through these differently monthly averages slopes downwards, but we couldn’t really claim a decline with much confidence. (In technical terms, the coefficient on that line is not statistically significantly different from zero at the 95% level of significance).

One thought on “Has the coalition made people less interested in politics?”