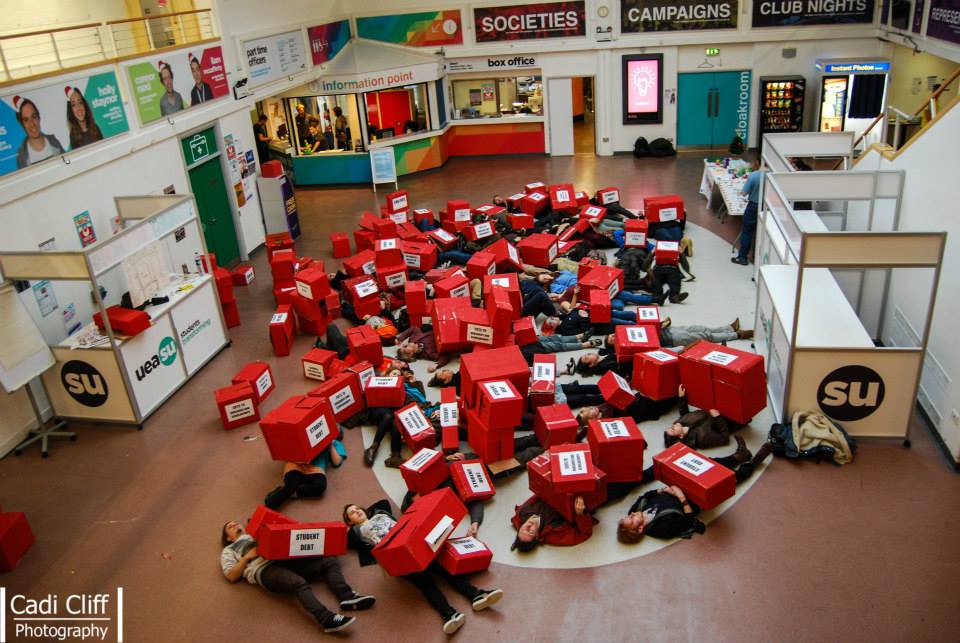 I was recently excited to hear of a new module being run in the Politics department at UEA next academic year entitled ‘Activist Campaigning’. Module convenor Dr Ben Little was good enough to let me interview him about the course, its history, and his hopes for its future at UEA.

I start by asking Ben to describe the module. Though it is new to UEA, he has been running it at other institutions for 8 or 9 years now. In its first form the course mostly consisted of masterclasses from external campaigners, before taking on a more practical bent. On the current model, Ben partners with an external campaigning organisation, who provide a brief for a campaign they’d like to run. The students respond to this brief to design that campaign, and they run it themselves over the latter 5-6 weeks of the course. At the end of that time they are assessed, not on the success or failure of their campaign – “I’m not gonna penalise people for not successfully convincing all universities in the UK to divest from fossil fuels”, Ben says – but on their own reflections on their experiences and how they learned from them.

The campaigns that have been run through the course in previous years have been pretty varied. One cohort of students, working with Intern Aware, extracted a parliamentary commitment to enforce minimum wage legislation for unpaid interns. Another group, working with Friends of the Earth, persuaded a local Tory MP to defy the whip and stand against their party’s questionable environment policy. Ben has not yet finalised which organisation(s) the first UEA run of the course will be partnering with, but based on his initial appraisal of the student consciousness, he’s keen to do something around issues of gender, or the environment.

Ben’s own background is mostly in cultural studies – alongside his academic work he edits Soundings, the journal of politics and culture founded by Stuart Hall, among others. Unsurprisingly, he has a long history with activism, having been involved in a wide variety of activist groups for the past ten years. It is with considerable humility and minimal detail that he tells me how he was “on the fringes” of UK Uncut, Climate Camp and Occupy, but it is clear that he is quietly proud and grateful to have played a part in these era-defining movements. On the party political side of things, he’s spent a lot of time around those Labour supporters “who are more interested in street activism”, and he was involved in bringing together an anti-Tory coalition in Barnet council to oppose extreme cuts and privatisation.

Speaking of that side of politics, I was reminded that the short description of the module I’d seen online specified that it is about “practical engagement in non-party campaigning”. This got me wondering whether there was any bias in politics education towards party politics over other forms of political action. I ask Ben what led him to this focus.

First and foremost, he tells me, he feels it would be plainly inappropriate to ask students to aid any kind of election campaign through this project. Moreover, he is insistent that active civil society groups are “crucially important” to politics. There must be a balance between party and non-party action, of course, but he is keen to give students an introduction to these other groups, whose impact is so often under-recognised. Happily, he’s generally found other politics educators share his opinions on this topic, especially at UEA.

Having experienced myself how difficult it can be to get stuck into activism without any formal training, I ask what kinds of skills and knowledge Ben was hoping students would take away from the module, to help them get more stuck in themselves in future. Perhaps surprisingly, research skills are top of his list. As he puts it, “you’ve got to genuinely understand what you’re attempting to intervene in to be effective […] if you’re having a debate with an MP or someone from a large corporation and you don’t know your stuff, you’re going to be exposed pretty quickly”. Ultimately, all activist organisations are groups of people brought together by a certain set of issues, and yet they hardly ever spend much time developing their shared understanding. I’ve always thought this a rather strange and unfortunate tendency, and it’s excellent to see a project like this module putting knowledge at the forefront of the activist experience.

Ben goes on to emphasise the importance of organisational skills such as deliberative decision making. He describes how “we sort of adopt a horizontalist approach”, although students will have “defined roles and responsibilities within the campaign where they’ll have a relative level of autonomy”. This kind of collective power structure is common to many grassroots groups, but it is often a struggle to initiate effective action on this model, so providing a foundation for successful non-hierarchical teamwork is crucial. As part of this, Ben hopes to emphasise that all members of the group must be reliable and responsible – “if you say you’re gonna do something you’ve gotta do it, otherwise the whole team will be let down”. He also notes that creative skills are central to defining how the campaign communicates its message.

The Offshore Heist: Tax Avoidance and the Developing World from Nayomi Roshini on Vimeo.

Students on the course worked with Oxfam to raise awareness of tax avoidance in 2012.

My final question is about what happens after the course ends – are Ben and his team planning to offer support to students in continuing the campaign they’ve started, or in running others in future? His first priority, of course, is making sure the course has a good first run in its new home, on “getting a real sense of what is possible to do and what students are capable of”. In the past though he’s found that the links students make with organisations through the course have been really helpful for them in future activist work, and some have been able to start careers in the sector as a result. Beyond that, he wants the module to open up students’ horizons, to help them see how they can get involved in all sorts of campaigning work, on and off campus.

Activist Campaigning seems to tick all the boxes of an exciting, progressive form of political education. Ben’s promise to deliver “a whole range of different forms of practical knowledge”, his commitment to the importance of civil society activism and deep understanding of societal issues, and above all his enthusiasm for this pioneering learning project really grabbed my attention. I think this module’s gonna play an exciting, positive role in UEA life. And he’s excited to be here too:

“I get a sense that people at UEA are really committed and have a lot of energy, so it’s entirely possible that we could really build on this. I’m really looking forward to it.”