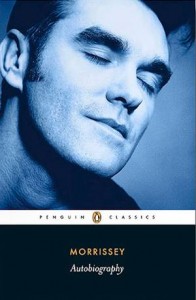 In autobiographical terms, 2013 belonged to Manchester. Barely had Sir Alex Ferguson passed a burning torch to David Moyes, than his second (!) autobiography was topping the sales charts. Not far behind, in the immodestly titled Penguin Classics series, was Morrissey’s memoir, of his home city, The Smiths, family, popular culture and a fair amount of score settling.

Morrissey’s Manchester receives a Joycean stream of consciousness introduction, including the highlight of “Mother Peter, a bearded nun who beats children from dawn to dusk” (p.9) After an overlong summary of an adolescence which serves as an attempt to put ‘The Headmaster Ritual’ to words again, things pick up. The real skills here are observation, detail and evocation – a whole cast of Mancunian characters are introduced then packed off, usually via early deaths from illness or accidents.

The shifting music scene of the mid-1970s has rarely been better evoked than it is here. “Iggy defined the new manhood that the world so badly needed, lest we die beneath the wheels of Emerson, Lake and Palmer” (p.113) or of the Sex Pistols first Manchester gig “They are not the saviours of culture, but the destruction of it – which suits me quite perfectly, and I manage to see them two more times that year” (p.115). One constant are the sketches of heroes and influences. Star struck at the sight of American author James Baldwin, Morrissey backs away, fearing the totality of rejection. Breakfast with David Bowie sees the great man announce he has had so much sex and drugs in his life, he can’t believe he’s still alive – to which Morrissey naturally responds “I have had so little sex and drugs I can’t believe I’m still alive” (p.245) That Morrissey met and knew Ian Curtis is something I had never considered, and brings a tear to the eye.

It is p. 147 before The Smiths get a mention, and the humour submerges into cattiness. It is made crystal clear from the start that The Smiths was Morrissey and Marr, with Joyce and Rourke mere accoutrements. Record label Rough Trade’s management is caricatured as congenitally out of touch, succeeding in little but holding the band back. Sandie Shaw is portrayed as a little madam, Tony Wilson a touch too keen to be ‘Mr Manchester’. Not that the author claims infallibility. This is after all a man who wanted to drop ‘There Is A Light That Never Goes Out’ as he doubted it was good enough for ‘The Queen is Dead’.  At times the sense of grievance does become tiresome – a frustration at world domination denied only by the incompetence of others is inherent. This tune (also played to death by Peter Hook of New Order) arguably reflects the dichotomy between critical and commercial success, financial eminence or artistic credibility. Few end up with both.

Morrissey’s solo career is a curious beast – there is much more of it than his time in The Smiths, and it has tended to swing from extreme peaks to extreme trough.  Yet few have had careers of his longevity and managed to maintain such a cutting edge – a track as political as ‘Irish Blood, English Heart’ was released a full 22 years after The Smiths formed. When ‘Margaret on the Guillotine’ appears Morrissey even receives a visit from the secret police, Special Branch requiring assurance that he did not pose a mortal threat to Mrs Thatcher. Amongst the score settling is clear anger that the NME could accuse him of flirting with fascism for posing with the national flag, yet a few years later make the union jack a virtual logo as the music press embraced ‘Brit-Pop’ with relish. How easily times change.

There are challenges in being Morrissey. Meetings with parents of the Moors Murders victims must have been harder than he sketches (p.167) and being the soundtrack to adolescent misery and sexual frustration brings a peculiar responsibility which is not addressed herein (“Angel, Don’t Take Your Life” on his first solo LP is a very deliberate anti-suicide song, written to discourage fans from killing themselves). At particular times clumsy pronouncements on animal rights or animal welfare in China have rightly brought opprobrium.

Yes, the world could survive without his examination of the Smiths 1996 court case (mercilessly relayed on p. 302-351). But griping and the lack of an index aside, there is little else wrong with this book. What we have runs parallel to Morrissey’s best music – a genuine slice of thoughtful popular culture, and an insight into Britain and Britishness, that matters. Why is Morrissey important? Arguably it is for the sense of loss that has always pervaded his – and The Smiths work. Whilst critics focused on the personal introspection and sexual failure in songs like “There Is a Light That Never Goes Out” or “Unloveable”  watch the video to “Dagenham Dave” and see an England that has shifted irreparably in our lifetimes. As Dave’s intended dumps him in the underground car park, by a giant Ford motor logo, and he angrily smashes Morrissey’s gold disc, we seem to be left with nothing, except absence and anger.

Still, there is always X Factor, Britain’s Got Talent and Simon Cowell………….

Paul Stott is an Associate Tutor and PhD student in the School of Political, Social and international Studies.  His thesis, “British Jihadism: History, Theory, Practice”, examines the involvement of British Muslims in Jihadist violence at home and abroad.