Following the attempts of the Spanish government to prevent an independence referendum, one of our Catalan students explains why he wants independence for Catalonia from Spain.

Last Sunday, just like 2 other million people, I voted; and did so in favour of the creation of a new Catalan Republic. Since the referendum took place, the independence process has gained a lot of media coverage, mostly due to the violence of the riot police against the population seen that day. Because of this extensive media attention, many news outlets have tried to interpret and explain the situation between the Catalan and Spanish governments, but unfortunately have oversimplified many factors, and one essentially is what this article tackles: the reasons why so many Catalans want to achieve independence from Spain.

As a Catalan myself, I am fully aware that the “Catalan people” are not a homogenous group by any means, rather the contrary, and in these past few months the population has become increasingly divided, so I do not claim to speak for all Catalans nor am I trying to explain all the reasons for which many Catalans want independence, but I will try to qualify the oversimplified statements made by non-Spanish news outlets. 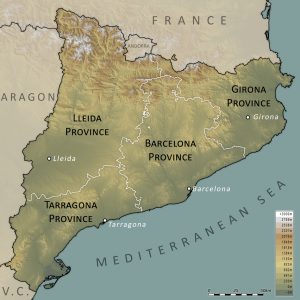 First, it should be made clear that not all Catalans want independence for purely economic reasons, although it is one of the oldest arguments for secession. Since the economic crisis of 2008, it is true that there has been a sentiment among many Catalans of “exploitation” from the Spanish government. Basically, many believe that “we give more than we receive”, and this argument is usually followed by a comparison to the regions of Euskadi and Navarra, which enjoy the privilege of managing their own taxes before being sent to the central government. The reason for this fiscal pact has its roots in history, and we will not go into detail here for the sake of brevity, but it is undeniable that this has created a degree of discomfort between some Catalans during these years, however it should not be considered neither the main nor the sole reason.

Mentioning these two regions brings me to the second argument, which is possibly the trickiest one to understand, that of identity. Many news outlets have referred to the Catalan identity as one of the major reasons (together with the economic argument) for wanting to break up with Spain. It is true that Catalonia has its own language, its own culture and most importantly, its own identity. But that holds also true for autonomous regions of Euskadi, Navarra, Valencia, Galicia, the Balearic Islands and Asturias, all with its own culture and language. All forms of culture and language that weren’t in Spanish were banned equally during Franco´s regime in attempt to homogenise the country; so although true, the fact that we have a different identity other than Spanish should not be considered as a main reason for wanting to break up, although many Catalans will tell you the they do not feel Spanish at all. Moreover, it should be noted that many Catalans feel both Spanish and Catalan equally, like many other people living in the aforementioned autonomous regions.

The following reason is what I consider to be the most overlooked matter by international media outlets, and at the same time consider to be the most relevant one, and that is the Government’s endemic corruption. Again, for the sake of brevity, I will not go into detail here but will only point out one case, the “Operación Catalunya”, which I think exemplifies perfectly the persistent corruption in Spain. In brief, the former Home Secretary of Spain Jorge Fernández Díaz from the Partido Popular used high-ranking officials in the police force to discredit political adversaries (such as Catalan and Leftist politicians) and tried to prevent investigations on corruption cases that affected their party. It should be noted that the investigation (and later the findings) regarding this case came from a parliamentary commission encompassing most of the opposition groups. Because of this, not only Fernández Díaz had to resign, the Head of the Anti-Fraud Office of Catalonia was ceased by the Parliament after the investigation because of a recorded call between him and the former Home Secretary regarding the “private linen” of Catalan politicians and how to discredit them. The fact that the Head of an institution that its sole purpose is to fight corruption is corrupt himself speaks volumes of Spain’s political situation.

Lastly, the most recent reason for which many Catalans want to become independent has been the astounding inability of the Partido Popular to dialogue and find a solution. The question of Catalan independence is clearly a political issue, and a persistent one too, and so far all the Spanish Government has done is shield behind the Constitutional Tribunal and its rulings, and using them to justify the massive deployment of police and their use of violence. These actions have galvanised the population in a way that no other argument (from the above mentioned) has ever been able to. As I write this, independence has not been proclaimed yet, but if the Spanish government does not change its posture and tries to dialogue (which still does not seem the case) in the next days, we may see independence being declared very soon.

This blog was written by one of our students at the University of East Anglia, but published on the basis that their identity would remain anonymous.

2 thoughts on “Why do we want independence? A Catalan UEA student explains”