Dr. Chris Hanretty has published a new article on the media coverage of elections.

I like opinion polls as much as the next person.

No, scratch that — I like opinion polls much more than the next person. I collect them, aggregate them, and make predictions using them. No matter what I tell myself, I have to realize that that’s not normal.

Yet even I realize that sometimes, it would be better to have fewer opinion polls and more coverage of substantive issues. Although there are now a number of services aggregating polling in the run up to the General Election, it might be nice to know a bit more about the parties’ stances on deficit reduction, and a bit less on whether UKIP will end up with eleven or eleventy-hundred MPs.

That way of describing the issue assumes that polls are somehow crowding out in-depth coverage of the issues — that every minute or column-inch dedicated to scrutinizing the latest release from Ipsos-Mori or YouGov is a minute less dedicated to scrutinizing campaign promises. If you assume that, there’s a naturally tendency to think that it’s only low-quality media outlets that use polls, and that high-quality media — those that cater to well-educated readers and viewers who care about politics — are more likely to avoid polling.

It turns out that this picture isn’t true. In a recent article on the use of horse-race coverage of elections — basically, any story that mentions a poll, and thereby frames coverage in terms of electoral winners and losers — Susan Banducci and I find that it’s high-quality outlets which are most likely to cover politics as a horse-race.

We’re able to reach that conclusion because we analyzed the probability of a given news item featuring a reference to an opinion poll in more than eighty thousand stories in 160 different European print and broadcast outlets in 27 different countries at three different points in time. We find that horse-race coverage is most frequent in polarized party systems with close electoral contests, and in large markets with professional journalists. These findings challenge the traditional view of horse-race journalism as a ‘low-quality’ form of news. This is still true even when we control for the different propensity of outlets to cover `political’ stories. In other words, it’s not the case that high-quality outlets cover more polls because they cover more politics.

You can see our predictions for different countries and different types of outlet in the graphic below. 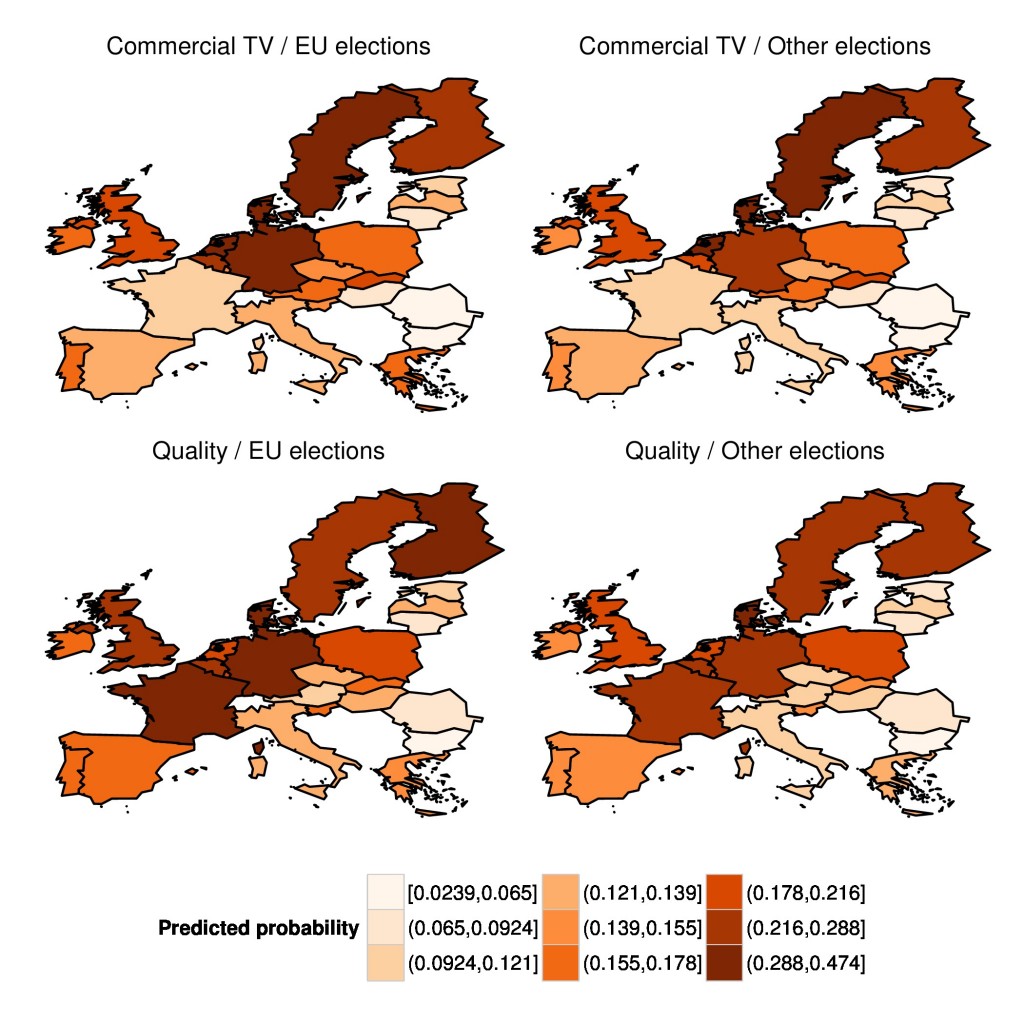 So if you want to cocoon yourself from polls in the election campaign — and I can’t imagine why you would — do yourself a favour, and swear off the Financial Times and the BBC, and start reading the Sun and watching Channel 5 instead. You’ll get a lot less coverage of politics in general — and almost no coverage of opinion polls.

Dr. Chris Hanretty is a Reader in Politics at the University of East Anglia.

One thought on “Opinion polls and the media: You can lead a horse to coverage of politics…”